Film Ratings and Censorship in Thailand 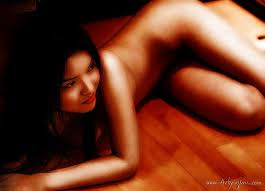 Traditionally, if a film contains nudity, extreme violence or culturally offensive material, producers must cut and edit the film under the control of Film Censorship Board (FCB). The FCB, 200 police personal and other government officials, has overseen film screening and censoring process. All of Thai films will be rated by a committee that consist of 7 people from state agencies that are involved in all kinds of media and only 3 more people will come from the film industry.

Many critics also argued that such a biased system raises questions of constitutional rights and freedoms of expression.


The categories of the new film rating system are as follows: 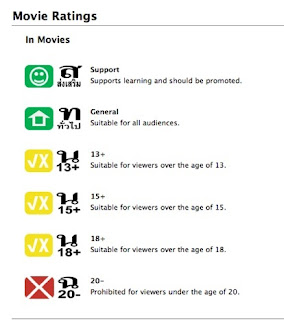 - General Audiences: Films that are suitable for all age groups. (No sex, abusive language or violence)

- Support/Promote: Films that should be promoted on the basis of cultural or artistic merit.

- 13 plus: Films that are not recommended for anyone under 13.
(No violence, brutality, inhumanity, bad language or indecent gestures)

- 15 plus: Some violence, brutality, inhumanity, bad language or indecent gestures will be allowed.

- 18 plus: No exposed genitalia, crime or drugs.

- 20 plus: Sex scenes are allowed but no exposed genitalia.

However, the ratings are only recommendations, not the serious prohibition. So, if a movie in Thailand is rated as 18-plus but you are 17 year old. You still can go and watch the movie, but only exception for the 20-plus category, where you actually have to be older than 20 year old. So, what is the point of "rating 18-plus" if under 18 year old can still be able to watch the film anyway?

"I just walked up to the counter service and buy the movie ticket. No one ever ask about my age or my ID card and I just enter the theatre," said 17 year- old- girl who is a movie watcher fan.
This banned issue seems to make all the filmmakers lose the confidence of creating their interesting idea. There is a majority of a very conservative state agency committee who are involved in rating system of Thai film and always come with double standards. The question raises in many film makers that the artists will have enough artistic freedom to make films the way they want to or not?

Now, we are in capitalism world. The only thing that matter is MONEY. All film makers and the distributors are seen as business which create the idea for earning money in return. They would like to sell the ticket and promote in order to earn the money as much as possible! The problem of the rating system in Thailand is because of the profit oriented system of the distributor.

"Rating system is a must in Thailand, which is all kind all film needs to be adjusted and provided for the right group of audience," said Adisak Jarenantaseen, employee of GTH film production house. "Some underage children may not have enough potential to evaluate an analyze their cognitive and critical thinking of their own. These one kind of media that can create a huge influence and impact to human mind set."

"The bureaucrats will still find ways to censor films if they feel justified that there was an offense to Thai culture, which is always biased,” said a film critic who wished not to be identified.


The CASES in Thailand: 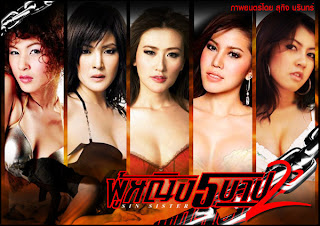 A few years ago, many film watchers were surprised that the Thai government allowed the showing of raping, swinging and incest scenes in the movie Poo Ying Ha Bap, or “sin sisters”.


However, when the VCD was released, the censorship board had cut some of the scene that are the most two provocative scenes (two girls kissing and a humorous love scene of a nurse lost her virginity to a mentally challenged patient) and the movie wasn't seemed to be the same without these two scenes. 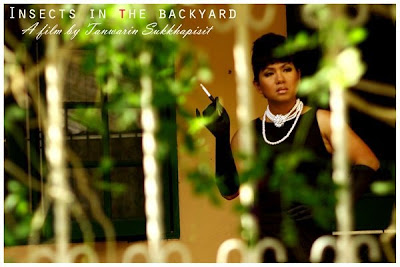 "Insect in the backyard" is another example.

The government seems to protect the image of the society but didn't try to protect and solve the issue, which everyone know that these kind of issue is occurred in our society! The movie maker just try to reflect the society in term of art film to the audience!

The rating in Thailand is just made up for the reputation for good image of the country of great culture but in the reality the rating or protect doesn't really work in the proper way.

In the country with a very sensitive culture like Thailand, it seems like we are protecting our youth from cultural flowing. Westernization play a very important role in our global culture. Even our Thai film are rated! The under-aging kids can still download it from the Internet or view it online! Because there is lack of or gap of law.

Posted by Thaifilminsight at 1:12 PM

Thaifilminsight
Bangkok, Thailand
This website is dedicated to Thai films. The website is aimed to create a diary or journal that will guide the viewer though a series of films. Simultaneously, the film will be critically observed and analysed to provide an informative comment. This is to promote Thai film and raise the awareness of the high potential film industry here in Thailand. Consequently, this would push the Thai movie industry to claim its position at an international level. :) LOVE and ENJOY THAI FILMS Become a Facebook http://www.facebook.com/ThaiFilmInsight https://twitter.com/ThaiFilmInsight

Which of the following film industries to do prefer?

Translate this BLOG by GOOGLE